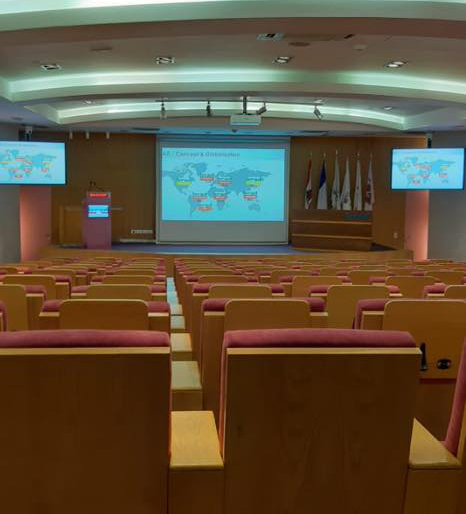 IRCAD, Institute for Research into Cancer of the Digestive System, pools digestive cancer research laboratories, a research department in computer sciences/robotics, and a training center in minimally invasive surgery. It was founded by Prof. Jacques Marescaux in 1994 and has quickly emerged to be the world's No 1. MIS training center.

The international giant of robotic surgery, headquartered in Strasbourg, has chosen to locate exclusively in Lebanon, in the Middle East region, more precisely at the Levant French University Hospital. A new proof of the excellence of the medical field in the country of Cedars. An inaugural ceremony of "Jacques Marescaux Auditorium," founder of the IRCAD took place in July in the hospital in the presence of many political figures and health professionals.

Welcome Message from President of IRCAD

IRCAD, the world reference center for research and information in minimal invasive surgery, celebrates its 25th anniversary in 2019. This center has trained 6,200 surgeons from 116 countries in Strasbourg in 2018. Thus, we are overwhelmed to open our 4th IRCAD international branch in Beirut, with the cooperation of Antoine Maalouf, president of the Levant Hospital. This new IRCAD branch aims at training the Middle East surgeons to the latest surgical techniques. They will be assisted by our pool of 800 experts, opinion leaders in their respective domain.

Starting November 2019, the Lebanese trainee surgeons will attend live broadcasted procedures taking place in Strasbourg or member hospitals of IRCAD. They will have the chance to chat with operating surgeons in real-time.

In the afternoon, many conferences, theory presentations on complicated cases, as well as workshops, will be held by experts who will interact with the audience to answer the real needs of surgeons.

IRCAD is aware of the constant evolution of minimal access surgery and organizes courses in flexible interventional endoscopy and robotics. Besides the seminars organized by Lebanon IRCAD, the surgeons will benefit from the online teaching available on WebSurg (www.websurg.com), the first surgical training site on the Internet. This free site, available in 7 languages, allows the surgeons to attend more than 2,100 surgical procedures in HD, to introduce more than 100 operational techniques, to discover 750 experts opinion and to access to 1,600 conferences.

Further to Asia IRCAD in Taiwan and IRCAD America Latina in Brazil, it is my greatest pride to inaugurate IRCAD in the Middle East wishing the success to this new twin of IRCAD.

The launch of a new surgical robot at Levant Hospital

For registration, please download and fill the registration form, then send it by email to info@cliniquedulevantsm.com.

Option A (Only the course including coffee breaks and lunches)

Option B (Course, coffee breaks and lunches with Hotel @ Hilton)

Upon request
Experimental Lab and hands on “coming soon “